On Monday, November 14th I was privileged to attend the official book launch for the latest book on Ronald Knox, "Ronald Knox; A Man for All Seasons", hosted by Heythrop College and Francesca Bugliani Knox, the editor. It was a pleasure to meet several of the contributors to this large collection of commentary on Knox's life and writing, as well as previously unpublished works.

Also present were "the twins", Claudia and Nicola (nee Macaskie), who met Ronald Knox at Aldenham after being evacuated there with 50+ other girls and 15 nuns from the Convent of the Assumption in Kensington during World War II. They were as thoroughly English, and thoroughly charming, as one might expect. They reminded me of two Miss Marples, complete with twinkling eyes at almost 90 years of age! The Creed in Slow Motion and The Mass in Slow Motion were dedicated to them, and the sermons Knox preached at their respective weddings are included in Bridegroom and Bride.

Here's the excerpt from Evelyn Waugh's biography which describes them:

... "Claudia and Nicola, the twin daughters of  Mr N.L.C.Macaskie, K.C., who attained and retained a particular place in his affections.
These two pretty children arrived in the autumn of 1943 when Ronald's popularity and fame were well established in the school but when he was suffering from a dismal sense of discouragement in his more public life. They first attracted his attention when Nicola, for a 'dare', burst into his sanctum and asked whether he liked pink blancmange. Shortly afterwards there was a more solemn encounter. Claudia was quite suddenly struck alarmingly ill, and Ronald was called to anoint her. It was the first and only time he gave the last sacraments; he had often spoken of them in his sermons but always with the implied assumption that they were something brought in extreme old age. The summons to the apparently dying child was an incident of poignant emotion. The twins invited him to stay in the holidays, and soon their house in Kensington Square became his regular lodging in London. He said they should put up a plaque: 'Ronald Knox practically lived here.' Later they were among the very few of his friends to whom he wrote letters in his old, free, affectionate manner. In May 1947 he wrote to Nicola: 'You and Claudia are the only people I want to write to except on business.' In the drab and sour period of victory their friendship was a substantial solace. With his habitual reticence, he seldom spoke of them. At the dinner given to him in London on his sixtieth birthday the appearance of Claudia, dressed for a ball and prematurely called away by a young man in a white tie, created a stir of curiosity among his elderly friends."
Posted by Vicki at 8:07 AM 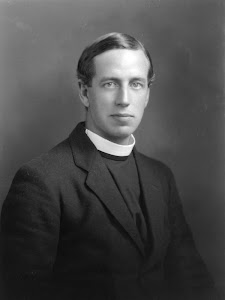